And still no one knows what happened

Lord Turner's effort at excusing bankers and politicians has failed to properly address the underlying issues. We all know what happened, but we still have yet to hear why or how. We still don't know what security all those securitised debts is associated with: the UK might own the whole of Louisiana and Alabama for all we know.

The best analogy TMP can come up with is a car crash. 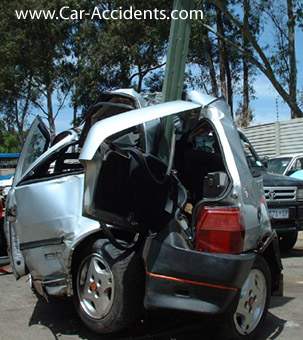 Brown's instant reaction has been to blame the lamp post for jumping out in front of him. Then blame the maker of the car, and then the provider of the petrol - while most normal people traditionally tend to suspect drivers who accuse jumping lamp posts, of being pissed.

Then there's also the matter of misleading the road signs. This all kicked off because Slick Willy Clinton directed the US financial industry to buy the Democrats some quick votes using loans and mortgages for people who had no hope of repaying them.

This is also the first IT "Microsoft Office Recession". Ever since spreadsheets were invented, accountants and financial analysts everywhere have believed in their infallibility. Even when it was obvious to an averagely intelligent normal person that the decimal point was in the wrong place.

There have been all manner of solutions proposed concerning the nature of the car, the octane rating of the petrol, the placing of the road signs or even the lamp post. But these seem to be missing the main point - TMP's suggestion would be to breathalyse the driver of the wrecked car, and lock him away for a long time where he can do no more harm (and in the case of the Auld Fraud, especially if the boozometer said he was perfectly sober...)
Posted by The Majority Party at 6:45 PM