Efforts by the BBC and its house journal, The Guardian, to whip up a frenzy over eavesdropped comments from the Tory shadow Home Secretary concerning the right of people to decide who should be allowed into their homes, appear to be backfiring in the same way as Labour's poster own-goal.

It is is becoming increasingly apparent that the real choice at the election is between the reintroduction of  common sense conservatism (small "c"), and yet more scope for Labour's cabal of vociferous minorities, with its >3000 petty new laws, introduced over 13 years to pander to its supporting cabals' desires to criminalise normal people and common sense, by manipulating everything from the presumptions around climate change, the overrated threat of terrorism, the (discredited) value of "diversity" and the need for "inclusivity at all costs" that stridently promotes the rights of minorities, whilst defiantly confronting the wishes of the majority.

The libertarian approach that TMP supports would be delighted for any who wanted to offer a "gay only" B&B service, and would not question the right to do so for a moment.

However, the B&B row is actually about religious intolerance; the couple in question hold strong Christian views and were willing to stand by them. And religious intolerance is much older than "gender orientation" discrimination. The gay community's hysterical reaction to this couple's genuinely held Christian beliefs have a lot in common with a bunch of murderous thugs who rode around Judea about this time of year 2010 years ago (give or take), looking  to set examples.

Perhaps the strident secular reaction of the Gay community to the B&B affair is partly designed to deflect attention from what's going on in the Roman Catholic church. For some inexplicable reason most reports seem terrified to mention the "G" word when discussing the assault by male priests on male children.
Posted by The Majority Party at 12:38 PM No comments: 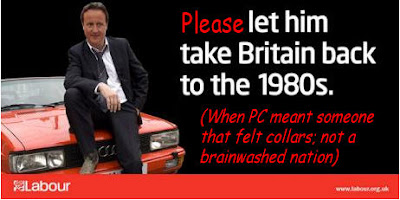 If anyone still needs confirmation that Labour was woefully out of touch with the people of the UK, this self-inflicted poster campaign must surely be it? Even with the original text from Labour's increasingly desperate spinmeisters, this poster will go down in history as one of the most ill judged ideas of all time.
TMP suspects it's just about safe for Sam to start measuring up for the curtains, and for Gordon arranging his offshore companies to look after his retirement sinecures.
Posted by The Majority Party at 10:55 AM No comments: