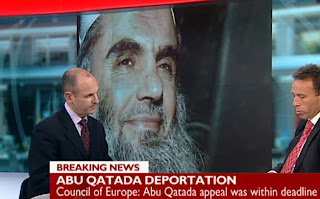 Posted by The Majority Party at 4:17 PM No comments:

Just as there came a moment when the "Big 5" terrestrial TV broadcasters realised their game was up, and the broadcast hegemony was doomed by the arrival of "digital", so British politics changed forever when George Galloway came from nowhere and was swept along on a tide of frustration and despair.

None of the usual parties have anything to offer any of the electors, other than seemingly random imposition of ever more austerity, and ever more sinister, stupid and pointless regulation - and worst of all - yet more politics and politicians, in form of the many further gravy trains of devolution that play to the old ideas of "divide and rule".

So can the Internet do for British politics what digital TV did for broadcasting, and organise an audience that is spread across a thousand channels of opinion into a electable proposition?

We might as well accept now that Cameron is clumsily and hopelessly tainted and has missed a whole fistful of golden opportunities. The cabinet of millionaires and chums - barely any of whom have done a real day's work in their privileged lives - has turned out to be such a disappointment.

Cameron is evidently not the bloke for the job of PM, and George "don't call me Gideon" Osborne is to economic and political strategy, what the BBC is to objective, unbiased and "value for money" public broadcasting.

It seems like time for real change. And we need to be careful that is the right change, and not just change for change's sake - which is likely to be the fate of Ghastly George Galloway's futile proposition.
Posted by The Majority Party at 12:52 PM No comments:

Do you want to live in the third world or not?

Since we have completely run out of money- tax avoidance has suddenly become the same sort of wickedness as tax evasion in the minds of the same expense-fiddling spendthrift politicians that wasted the entire reserves of the UK, and then another TRILLION quid. And mostly on hare-brained schemes designed to buy votes for their respective parties.
Although the Daily Mail has picked on Amazon and Google - with passing references to Microsoft and Apple, let us not forget those other stateless bucaneers that have very effectively "stuck up" bricks and mortar business that pay taxes and rates - eBay and PayPal.

But to focus on tax avoidance and fat cats is to precariously miss the point.

US - or should we say - Global? - online corporations that don't pay the same taxes as native businesses is just the start; they tend to source the cheapest skilled labour from the cheapest countries.

As to the “fair game” argument, it has consequences. The US would certainly not allow UK companies to have invaded their commercial life in the same way; they have re-written copyright and patent laws to suit themsleves, and now set about imposing them by turfing foreign citizens from their beds in their own countries at 4am to face extradition.

Ultimately customers who buy the products are going to be victims: when you choose an Apple Product, you are voting to accept - in the inevitable long run - the same type of working and living conditions that apply in the countries of manufacture. Use Google and look up “apple manufacture china scandal”.

Moreover, once a big US player is in a market, it is impossible for a UK (or any other) entrepreneur to get any sort of venture funding for a product or idea that it perceived to be even slightly competing in a vaguely similar market, because the venture money assumption is that the behemoth will steamroller the market sooner or later.

This is a crucial and fundamental issue and deserving of a proper Mail crusading effort; our utterly useless governnment and opposition do not have a plan or a clue how to deal with it, and the sight of Dave & Gideon sucking up to Google and rest without a plan, is simply apalling.

So then, consider the consequences of reducing UK corporation tax to 10% - and telling the EU and US to swivel on it? We really don’t have much time left to turn this mess around for the benefit of the UK.
Posted by The Majority Party at 10:47 AM No comments: More of the same old failed tactics of the past 60 years from the same of failed economists and witless politicians will not help.
Posted by The Majority Party at 11:57 AM No comments:

The infrastructure of the South East and East Anglia in particular was pretty much abandoned by the last government for lack of voter potential. However, VAST sums were lavished on traditional Labour supporting areas in the North, Wales, Midlands and of course Scotland - where Broon and his Caledonian cabal hung out.

And now CMD is planning to blow £30bn+ (that we don't have) on trains to get the occupants of North Britain down south even faster? We can only assume that this will be using entirely British technology from end to end.

But fibre to every building in the land would be a FAR better use of the money - assuming it was using all UK made kit.
Posted by The Majority Party at 12:20 PM 2 comments:

No more rearranging the deckchairs?

David Cameron showed up on the Andrew Marr show (Jan 8th 2012) and said a couple of encouraging things. So far the coalition has been mostly  obliged to take bearings in a tempestuous global situation, compounded by Labour's 13 years of cock-ups and creeping state oppression. But rearranging the same old deckchairs has to stop sooner or later.

One subject he addressed was the inevitable/obvious move of calling the Scottish independence bluff, and forcing the issue of independence. Which we imagine came as a bit of a shock to the not-nearly-as-smart-as-he-thinks-he-is Alex Salmond. Intriguingly, although Cameron has always said he wants Scotland in the union, at this time ist's not at all obvious if he is bothered any longer, given the fact that Scotland has been a tory-free zone for several elections, and there are plenty of Tory MPs who have been pressing to split for years. Faced with the stark reality of making a decision, the general suspicion is that most Scots will not trust Salmond and his preposterous "Arc of Prosperity".

At the same time, we are assuming that the infamous "East Midlothian Question" of Scotland's dramatic over-representation at Westminster will be nailed once and for all, and the English can look forward to no longer to having to pay for Scottish social services.

The other significant comment was that Dave realises that ONLY the UK's small and micro businesses are going to be able to create the required 3 million jobs. Great news: now let's have that promised bonfire of red tape and positive action to help this crucial sector.

Moreover CMD came across very clearly the only politician anywhere in the British Isles with a whiff of leadership about him/her. Other than Boris, perhaps...
Posted by The Majority Party at 10:59 AM No comments: