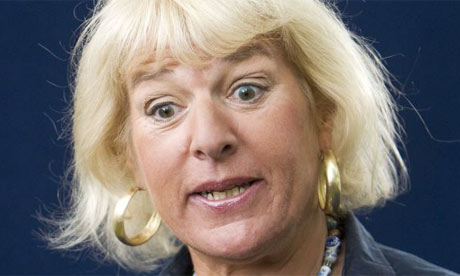 Carol Thatcher may well look like Boris Johnson after sticking his fingers in a 13A plug, but TMP wouldn't be banned from the BBC for saying so.

So the sight of the harpy controller of BBC1, Jay Hunt (no, it's not cockney rhyming slang) on the Breakfast couch this morning, lecturing us that the One Show was in fact a "celebration of diversity" made TMP's day. We have never seen the One show, and now we know what Ms Hunt is actually doing to us, then we have not missed anything in the past, nor need we do so in the future. Thanks, ma'am.

Like 99.999% of the population, TMP wasn't bothered enough about the Ross affair to write and complain - nor is TMP bothered about anything much else that raises the Daily Mail's blood pressure - the BBC of all people should reflect the entire nation and its zeitgeist. It's actually a very useful public service to examine these occasional frissons and place in perspective of age groups, attitudes and assumptions. In fact, it seems a rather grown up way to conduct the whole business, and one of the few opportunities the nation gets to calibrate its moral compass - we specifically do NOT need 100% screened and sanitised content and contributors, how very dare you, you silly woman. You can all leave that to ITV, who live in fear of their fickle sponsors and disappearing advertisers.

Err, so isn't that then a genuine celebration of diversity..? God, TMP is so confused.

Just as programmes are obliged to carry warnings about language, violence and sexual content, could this guideline also be extended to "celebrations of diversity" and anything else the social engineering dept at the BBC deems necessary to indoctrinate us with..?

If you do want an example of something that is gross, gratuitous and simply unfunny with no redeeming qualities, then watch out for BBC3's "Coming of Age" if it ever reappears. But TMP expects that it does tick all the diversity boxes.

The BBC is clearly headed for extinction along with its political sponsors. Maybe its partners in thought crime such as the Guardian recruitment section should be hedging its bets and seeking adverts from public employment outplacement consultants in preparation..?
Posted by The Majority Party at 12:25 PM